Below is a summary of the BOA’s viewpoint on new NHS data released 12 May 2022 on waiting times up to March 2022 in England and Wales.

Many difficulties have continued through into May. However, in spite of these difficulties, and through determined efforts of many, early signs of progress in elective recovery for England are showing in the March 2022 data. There were still significant challenges for Wales in latest data on waiting times up to February 2022. 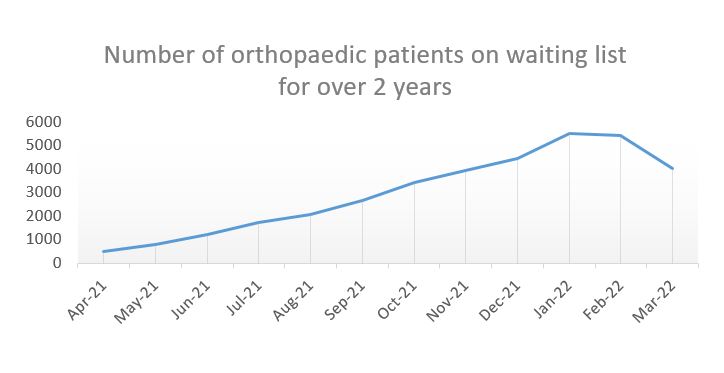 In Wales the situation is static rather than improving with the numbers of people on 18-week, one-year, 18-month waiting lists all stable. Those waiting more than two years for operations were up slightly.  Wales unfortunately started from a more difficult position, with 3% of the population on a T&O waiting list versus 1.3% in England.

There are a range of different challenges currently affecting smooth and efficient delivery of services, and our Council and Executive Team are monitoring closely.  We are continuing to do all we can to support the recovery of elective orthopaedic surgery across the UK.

T&O waiting list the largest for over a decade

Statement on the publication of the Government’s Elective Recovery Plan