History of the BOA crest

We launched an updated version of the BOA crest and logo in 2019 which is optimised for the digital age. With the increasing use of our website and social media channels to communicate with our members and other stakeholders, our logo has been updated in order to work effectively in these formats.

The new logo retains many features of the original BOA crest to maintain historic ties, while it has been updated into a format more suitable for online viewing. Below is an article on the origins of the original crest by David Dandy that was previously published in BON, the precursor to the JTO. 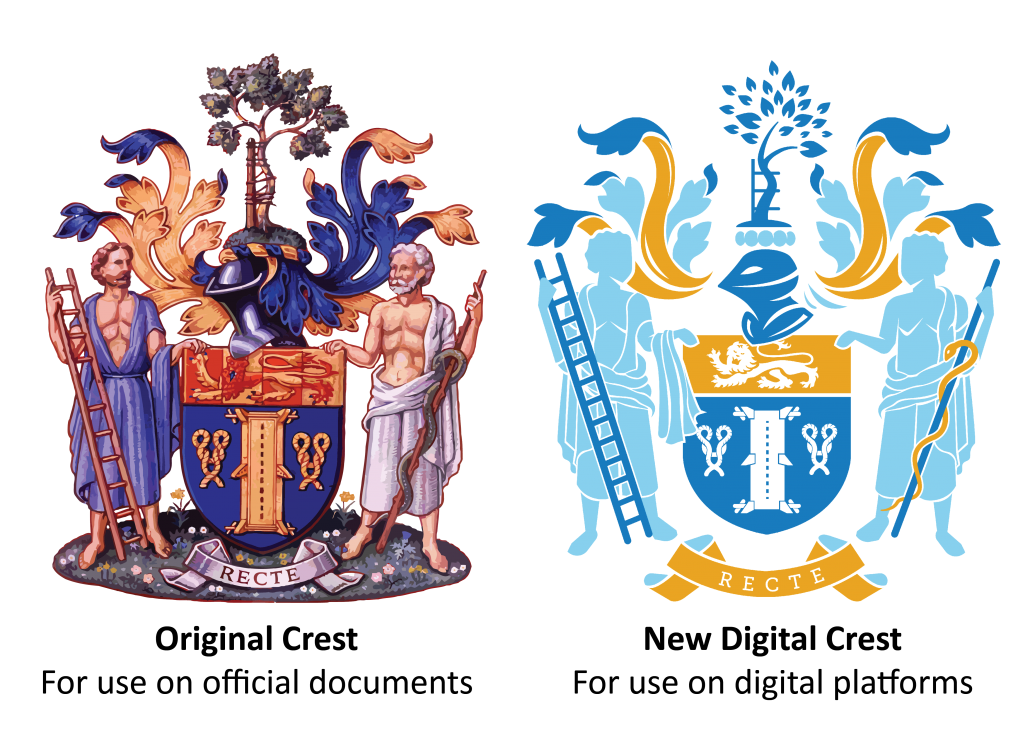 Originally published in the Autumn 2007 BON

The arms of the BOA were granted in 1952. The shield shows an ancient traction table called a scamnum, complete with ropes for attaching the patient, said to have been used by Hippocrates, and obsolete for several centuries. It has no relevance to contemporary orthopaedic practice.

The men on either side the “supporters”, are Hippocrates and Aesculapius, who easily outrank the sons of Aesculapius supporting the RCS arms. Hippocrates carries a ladder, used as recently as the Middle Ages to reduce dislocated shoulders. A rung has been removed to avoid breaking the patient’s neck. Again, no relevance to modern orthopaedics.

Why do we have such archaic whimsy on our letterhead when we could have had something relevant to the 1950s or the 20th Century? The answer may be that the application for arms was made by the President of the BOA, Sir Reginald Watson-Jones, who was also editor of the JBJS. The journal published a detailed article about the scamnum and other devices in 1949(1) that clearly appealed to Sir Reginald.

Sir Reginald was a passionate advocate of conservative treatment and opposed internal fixation and the use of implants. He disagreed strongly with the young John Charnley, who resigned from the BOA and took no part in BOA affairs until made an Honorary Fellow after retirement. Charnley published much of his basic research as Internal Publications of Wrightington Hospital rather than JBJS, edited by Sir Reginald. Sir Reginald may well have seen the arms as an opportunity to recruit the eternal support of the BOA and Hippocrates for his ultra-conservative views.

Sir Reginald’s influence may have gone further. The crest is a plane tree, said to represent the tree that shaded Hippocrates(2), in the form of a Tree of Andry. There are many plane trees in Lincoln’s Inn Fields, where both the BOA and RCS are based, and Sir Reginald was Vice-President of the College in 1952. Could the plane tree really have been a reference to Lincoln’s Inn Fields?

The chief, the band at the top of the shield with a yellow and red striped lion, may reflect another link with the Sir Reginald, a consultant at Oswestry as well as the London. He spoke passionately about the contribution of Welsh bonesetters and Hugh Owen Thomas to British orthopaedics and the lion is a clever reference to Wales through it’s similarity to the arms of Llewellyn the Great, or Llewellyn the Last to the English. The personal standard of the present Prince of Wales consists of Llewellyn’s arms with the addition of a green shield bearing the Prince of Wales coronet, which has only one arch instead of the two on the royal crown.

The red and yellow of the lion are used alternatively (counterchanged), a form often associated with medicine, probably because of the ancient arms of St. Bartholomew’s Hospital. The shield of the BMA, for example, is counterchanged in blue and yellow, the livery of the Apothecaries, and also has a lion on its chief. In passing, it is worth noting that the arms of the BMA are said to show the sleeve of a physician’s gown. A happy coincidence, then, that the family arms of the founder of the BMA, Sir Charles Hastings, bore exactly the same device.

The supporters and shield stand on a mound with the rose, thistle and daffodill all miraculously in bloom at once. The motto is “Recte” which, according to Sir Reginald(2), “…is to be translated not only as straightly but as uprightly – befitting, proper and good”, all qualities consistent with orthopaedic surgery and Good Medical Practice.

Coats of arms signify respectability, tradition, continuity and authority and in 1952 these must have been important considerations for the BOA. Many organisations today prefer a trendy logo to express their work and aspirations but coats of arms cannot be changed and heraldry does not meet this need.

Although it is interesting to speculate on the thinking and politics behind the design of the arms, whatever might have been chosen as the logo in 1952 would probably have been out of date by now. Our arms are dignified, easily recognised, an interesting talking point and should not be taken too seriously. It is even possible to get used to the curious anatomy of the supporters’ thoracic musculature and their ectopic umbilici.